I’m not much of a Chinese drama viewer. I watched a few and I liked them, but I skip most of them. However, I’m a sucker for time travel and romance stories. When I saw the drama description and the good grade it got, I decided to give Startling By Each Step a chance.

Startling By Each Step Details

My Review for this series

Before I knew it, I watched everything in one go. The story was so fluent. I just couldn’t stop watching. Like Ruoxi, I feel like I’ve been flashed back in time and lived a whole lifetime there.

I never got completely used to the haircuts and clothing. I do understand it is because of historical context, but it still was an eyesore.
The hairstyles of the men where just plain ugly. And the hairstyles of the women reminded me a lot of times of Minnie Mouse. The women’s clothing was also not to my liking. I absolutely adore the old Korean clothing, but these Chinese clothes just freaks me out. Throughout the drama I was thinking: how could people dress themselves this way? But don’t let it keep you away from the actual story. I just had some minor problems digesting the fashion style of this drama, but I still loved the characters. 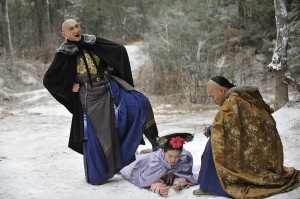 The Chinese had a really horrible fashion sense.

The story is like a journey that sweeps you away. It is just in one word: complete. The acting is superb. I wouldn’t re-watch it, at least not for some years, because I would not be able to watch the beginning with as much happiness as before.

Character development was awesome.
Every ‘new year’ you could feel the maturing, but at the same time the darkening of the Ruoxi and the princes. There are a lot of big time gaps, but it works for the story. As a matter of fact, I think it made it even better. The passing of time is a topic frequently mentioned in this series. Time passes so quickly and with the jumps it feels even more so.

The burden Ruoxi carries is very big, but she isn’t able to really share her story -even though she mentions it one time to prince 13 and also one time to prince 4-. And that makes it even more tragic. Ruoxi wanted to love and give, but even though she was cherished in return, she was never able to truly give herself completely. And in the end she was blaming herself for everything. Not to mention: all this time she had no idea if her real body was still alive, if she would return one day, what happened to the original Ruoxi, …

Startling By Each Step

There are no real bad guys in this drama. Even Ruoxi isn’t always a nice heroine. Though overall she means well, she does willingly make some decisions that hurt others a lot. But that is the feel of the whole story… literally “Startling by each step”. Everyone means well, wants to do good, but that doesn’t mean they make good decisions, or that everything turns out the way they meant it to be.

I did wish for Ruoxi and the princes that it would all have turned out different. But love is not rational. And Ruoxi is just too bloody smart and caring for her own good. If she would have been dumb, she would have loved another man, married him and probably lived quite a pleasant life (for at least some time). But how can you blame her decisions when you know her feelings, sense and knowledge… and the struggle she is having with them. She comes from a society where she can take care of herself, but soon realises that she now is within strict limits. Going away would have meant hard labour or no food. Fate won’t let her die: and frankly, it is not easy to kill yourself when you cling to life so dearly. She is a true survivor after all, just trying to make the best of it. 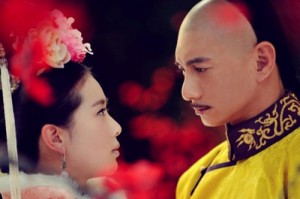 Ruoxi has great chemistry with all the princes.

A lot of dramas have sad endings that leave me angry and frustrated. The persons get separated or die because of certain decisions they made, but the decisions and hardship feels forced or unnecessary.

Conclusion of Startling by each step

Even though this drama was filled with pain and suffering, it felt real. I could completely relate to why characters did certain things, even though I would sometimes have done it differently myself. And in the end it was just all about true love, friendship and passion.

2 thoughts on “Startling By Each Step”