To be honest, Nail Shop Paris mostly confused me. This drama just didn’t “nail” it.

My Review for this series

The story starts out fascinating, and to be fair, it had a lot of interesting ideas in it. A lot as in: too much. I always find it a bit painful when I realise what a show could have been, if it would just have been executed differently. Initially, there were some good plots, but it all felt like ‘so much to do, so little time’. 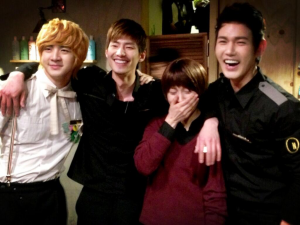 Surrounded by pretty boys. Who will be the one?

I did not really feel the romance in the story. In order to avoid revealing too much, we’ll call them boy A and boy B.
I do understand why boy A liked her, because there is some development and some logic to it. I know love isn’t always logical, but still. To me it felt like boy B just out of the blue decided he loved her too.

And the boy she starts a relationship with.. arg… he just goes for it like: bang! I can appreciate that there is some action and he knows what he wants. But to me it felt like he nearly forced her into a relation she wasn’t sure of she wanted anyway. I would have felt really pressured and uncomfortable. Isn’t there something in between the ‘I can’t say my feelings’ and ‘you showed some interest, now you are mine until death do us part’.

And then the girl herself, she is a totally different story: make up your mind lady! The plot of Nail Shop Paris just keeps switching and switching and in the end it didn’t feel like the choice was actually made… 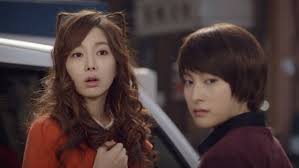 The parts where she is ‘writing her novel’ were plain boring. I honestly think this whole subplot could have been erased. That was the moment the acting was the most awful and the wigs made it even worse. To me it symbolized what a horrible story she actually must have written, because the plot she wrote was worse than the plot(s) the actual drama had. Thankfully she had a change of career!

The Gumiho part was a nice twist, but it did make the story more confusing and forced in its plot.

There was only one scene that caused me to laugh. And it was a scene where she was crying. Because, you know… one of the boys she liked, said he liked her like a little brother! (and not like a girl like she wanted).

Dear Bunny (horrible nickname), if you dress up like a boy, act like a boy, say you are a boy.. you can’t expect straight boys to fall in love with you and develop feelings for you other than that of a brother or a friend. The rare exceptions who do develop feelings are what I said they are: rare.
I love the idea of people falling in love no matter their gender. But a straight boy normally doesn’t feel attracted to another boy. And if he did say he was attracted to you, you would have a completely different problem: what if he only likes boys and he finds out you are a girl…

Just as vague as the series plot

The music. Uhmm.. I just watched the last episode and I can’t remember it. But it didn’t bother me, so that’s a pro.

Conclusion about this Asian drama

And what a drama it was… however I somewhat enjoyed watching Nail Shop Paris. But that is not enough. I normally love gender-benders! This one.. well.. this one was just there. I started really enthusiastic, watched it, got a little bored, skipped a little, watched again, felt confused, felt more confused, felt confused but also a bit amused by the confusion and then I was relieved the ending was there, because I couldn’t take any more episodes, but at the same time I realised it should have had a few more to just explain all the story lines, and… well.. you get the point.