One of the series that made me nearly die with laughter was My Bratty Princess (刁蛮公主; Diao Man Gong Zhu; Mischievous Princess). When I read the synopsis of Eternal Happiness I was captured by it immediately. Please enjoy my review of Eternal Happiness. 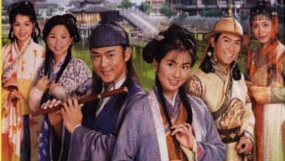 Special kudos for the accomplishment no drama has ever achieved before: I did not know who Lyung would end up with. This was a new concept for me. Normally I’m certain after the first (few) episodes who will be the couple at the end of the series, but here I was confused and tossed around every few episodes.

Eternal Happiness is much more than just a romantic gender-bender. It has many subplots which are just as important. There are some minor inconsistencies throughout the series, but as a whole the writers did manage to make all the (extremely!) complicated knots untangle and answer all of our questions.

Extra praise: they had some non-Asian actors playing minor roles too. In a lot of Asian dramas there are no foreigners and if they are present, they always look awkward. In this series they managed to really blend in and feel natural. 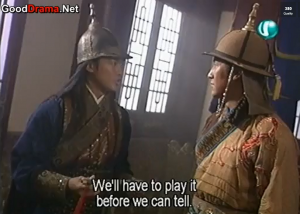 The main characters were intriguing. Lijung is very intelligent and accomplished, but she is not perfect. Here fighting skills are above average, but she is not a master and does get defeated ever so often. She makes rash decisions and can be very harsh, egoistic and uncompromising (yes, she’s a vixen sometimes). It sometimes annoyed me as a viewer, but at the same time made her three-dimensional and human. We can’t all be Mary Sues after all.

We can say the same for the main male characters Timur (love the name) and Shaohua. They make mistakes and don’t always do what’s right or smart.

All is fair in love and war – John Lyly

I think it is very sad this series is not better known. The acting is good (some of the minor characters over- or under-act a bit) and the writers surprised me by being able to make the story very complex and twisted, while still not getting tangled in it at the ending. I would have liked to be a bit more captivated by the romance. It is there, but is was not the kind that made my heart ache.

It was great to see a historical Chinese drama that was not located in the Forbidden City (wasn’t even build at that time). Well, that’s not completely true. Dadu is Beijing and it is where the Forbidden City would be build, but I liked this palace better. The rules were still strict, but not as extravagant. Overall the royal family felt more human (still traumatized by Startling by Each Step I suppose, haha).
In Startling by Each Step I already enjoyed the Mongol way of dressing (opposed to the horrible outfits the other people wore in that drama)  and I was pleasantly surprised by the appearance of them in Eternal Happiness. And no half shaven heads this time, praise the heavens! 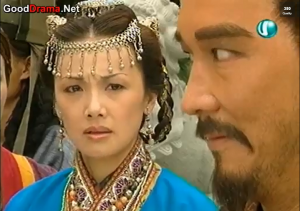 I would recommend it to anyone who likes gender-bender, adventure, history and romance.