“It’s hard to tell that the world we live in is either a reality or a dream.” Let’s get right down to business with my review of 3-Iron.

My Review of this film

Perhaps you have seen Spring, Summer, Fall, Winter… and Spring. This 2003 movie was directed and written by Ki-duk Kim. When I found out 3-Iron (Bin-Jip) was by the same man, I immediately planned to watch it. 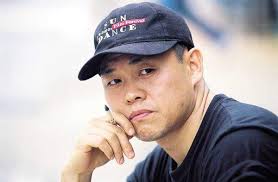 We see a young man on a motorcycle, putting folders on doors. A while later, he comes back to the houses and looks for doors where the folders are not taken away. It is a nice system to find out if the home-owners are away. He then lives in the house for a short while, eating their food, but in exchange also doing their laundry or fixing up some broken stuff.

It is an intriguing idea. What happens when you are away from home? If you can’t see something, is it even there? If you do good deeds when doing something bad, does it balance everything out? 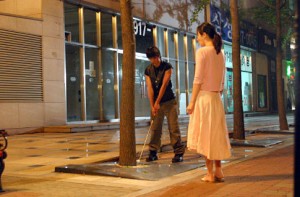 You won’t find out what moves this man to live this kind of life. Whatever happened with him, he has found his own way to deal with it. Halfway through the movie something happens, which puts the man in a new situation. Even though everything goes against him, he will not adapt to the way the rest of the world wants him to be.

I wanted to write: it does not seem to bother him. But that’s not true. It does bother him, but on a different level than other people. He is at peace with his current situation, knowing that there will be a payback eventually. He does not even try to defend himself or name the injustice the so called just people do to him.

In the film someone calls him a ghost. And certainly in the last half he seems to have changed in one. It is hard to describe how he made me feel. In some ways he was like a child: playing and sometimes breaking things… but never with bad intentions. With his way of thinking and living he has reached a life that felt nearly religious to me. You get the feeling that he could live on for hundreds of years, because he just forgets to age or die.

If you can’t see something, is it there?

There is also the woman. We know a little more about her, but there are still lots of questions unanswered. It doesn’t matter. The woman is the one person who truly sees our ghost here and is thereby saved. The peace this man gives us also heals her wounds.

It is heart warming to see the two fall in love. No words are spoken, but whole conversations are held. It all has a pureness to it, which I rarely encounter. But even their relationship; although being pure and lovely, is eventually held in a way that society would speak of in shame. It makes you think if bad is always bad, if rules must always be followed. 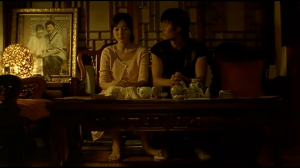 The beauty of body language

I truly enjoyed this film. The acting was superb and the music gave the right feeling to it. Strangely enough: Some sad scenes made me smile, some beautiful scenes nearly made me cry. I’ve seen people call it a simple movie, but I don’t agree. This movie was really intricate and even though the plot seems simple, it is a story that will haunt you for days; making you think about life and love.