Here we are at the Nine: Nine times time travel ending. A lot has happened, and overall the story had an interesting take on time travelling. It had his own rules and seemed to follow them well. I liked the fact that lingering interference could keep on changing the future. So even when Park Sun Woo was already back in the ‘present’, things could change. The 20 year gap that kept on moving at the same time made it a unique take on time travelling.

The ending gives us something to think about too. There are multiple explanations of what could have happened: some happy, some depressive. Before we continue, we must go back to the beginning of our series.

We’re in the Himalayes. We see the brother in a thick, red jacket. He is struggling to climb a snowy mountain. Finally he falls. For some reason he grabs an incense stick and tries to light it. But then a shadow falls over him.

We meet our hero Park Sun Woo and find out it is actually a year later than our snowy-mountain-scene. Apparently Sun Woo’s brother died there. The clothing and items fit, but the body is unrecognisable.

– Shadow standing over brother before he supposedly dies
– The brother is identified by the items, the body itself is never identified 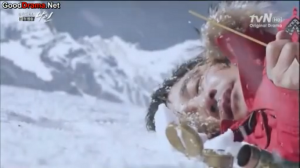 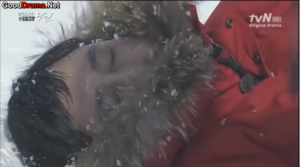 In episode 19 we’ve seen present Park Sun Woo making the changes in the past to make the future happy for everyone. He is going to marry. Brother is alive. However, he gets stuck in the past. There he records that he understands the meaning of the incense sticks. He says it’s his life: every time he used a stick his life shortened. Now he used every one of them and his chances are over. He just hopes everything turned out all right. He is starting to feel glad that he is dying, because it is fitting… And I think it would be very painful too, to life 20 years in the past and growing old, knowing the age gap between him and the girl he loves will be more than 20 years, even if he survives to meet her again.

Now, we fast forward a bit. We find out Park Sun Woo saw Joo Min Young just before he dies. He makes her promise that if she meets someone with his face in the future, she will keep her distance, because this person will ruin her life.

So in the end he realizes that Min Young might have had advice to avoid him, but he already loves her. Strengthened by the thought that he will always make the right choice + the fact that he now has a warning he might die when time travelling he chooses to love her anyway, because his future might be different than present Sun Woo’s. He follows Min Young to Nepal.

Notice: it is mentioned that his brother will be in Nepal at the same time too.

It would be all nicely wrapped up, but the writers decided to add a next scene. We are again on the snowy mountain. We see the brother in the snow, like in episode 1. A shadow falls over him… and then we see a bearded (older?) Park Sun Woo bending over and reaching out his hand, saying: “Long time no see, Hyung”.

My thoughts on the ending

1. The clean and tidy ending
It was all nicely wrapping up, until the very last seconds. Without the scene with the brother on the mountain, my explanation would be as following:

Present Park Sun Woo dies, but changes the past so teenage Park Sun Woo will have a good life. Teenage Park Sun Woo never finds his brother on the mountain. Because of the pills they found in 1993 he is treated in time for his brain tumor. He starts to like Min Young and in the end chooses to marry her. Yes!
Downside: our present Park Sun Woo’s friends and family have to life in their reality and do realize Sun Woo is dead.
Downside averted: Perhaps the moment Sun Woo tells child Min Young to avoid the person with the same face as he has, Sun Woo made his final changes in 1993 and the 2013 reality might have changed/stopped at the time he dies.

Although possible, this would bother me:
– Why does the brother need incense/climb the mountain again? He seems happy with his life.
– How does Sun Woo know and finds him on this big mountain?
– Why does Sun Woo has  a beard and is possibly older (okay, might be that it is some days later and he has fast growing hair).

3. Different choice ending
Suppose the brother we see dying at the end, is the same brother we see in episode 1 (there was a shadow too, remember!). However, Park Sun Woo makes a different choice when finding out about his dead a year later.
Instead of going back to the past to try to save lives there, he decides to save up (some of the) sticks. He then lives his life and after 20 years lights the incense to save his brother. This would explain why he looks a bit older. This would open up a whole new reality and make a whole new story. But then this mountain ending scene would be not ‘what happened’ but more like ‘what could have happened if’.

He does save his brother and leaves a death body (the brother is only identified by the items/picture). He somehow knows that it is necessary that present Park Sun Woo thinks his brother is dead and starts searching for the sticks. Like a big chain reaction. But that does make one wonder: where did the death body come from?

5. Park Sun Woo did not die in 1993
It would be strange the police messed this up, but what if Sun Woo stayed alive/came back to life in 1993? Then he would try to change his future again. He would wait for 20 years and then go to Nepal to save his brother. This way he could save his brother and make his other self not use the incense sticks. His other self would end up with the girl and his brother might find some happiness in the fact that a 20-year-older Sun Woo knows what he has done and forgave him. For 20-year-older Sun Woo it would be sad that he must live his life for 20 years without his friends and family, only to know that his other self would get the girl… However, it might be possible that by saving his brother his existence gets erased immediately and the whole time loop gets… well, not untangled but strangely stuck?

6. Teenage Sun Woo catches up with all his memories
Teenage (but already full grown now) Sun Woo goes to Nepal to get his girl. When it is the same date and time present Sun Woo realizes he can time travel, his memories catch up. He now knows what moves present Sun Woo. He does nothing and lives his life peacefully. However something unknown happens that makes him want to change his life anyway. Because it is already in the future that he realizes he wants to change, so he can’t change it in 1993 any more.
He finds the sticks. Maybe they are back on the mountain again, because the current time line Sun Woo never retrieved them from there (like a clean slate). He decides to change his life at the very beginning of all the misery: he goes back to the moment his brother is on the mountain, dying, and saves him. The Sun Woo from this time (Sun Woo who is 20 years younger than teenage Sun Woo) then has another change: he does not know his brother’s betrayal and his brother does not die. He also gets the girl. It’s like Sun Woo version 3.0.

7. Too difficult to name
Okay…

So like I said this time travel drama has his own rules. One of this rules is that the past changes the present of 20 years later. So even when a present seems changed already, it can still change because of a ripple that is made in the past.

Sun Woo said: Min Young is the key. Because of what she tells Sun Woo (guy in the past saying she should avoid him), Sun Woo knows he will die in 1993. This knowledge influences the present Sun Woo, because when his teenage self knows he will die, the present/future is changed again. Present Sun Woo does not die in 1993 but stays alive because of this knowledge. He then decides he doesn’t want to die, but does not want to let his brother die either. So he lives 20 years happily with Min Young. Then he goes back to 2012 to when his brother walks on the mountain. He saves his brothers live and everything will change again.

9. Brother is destined to want to change his past
Maybe his brother still feels sorry for killing his dad (even though he is happier now than in the other time line). He goes to Nepal, but because of all the changes it is a different date then the first time. He dies there (like in the first time line) and Sun Woo will again find out about the sticks. Because of his knowledge of present Sun Woo dying and the fact that 1992/1993 wasn’t that miserable any more he does not go back to 1993. He lives his life happy and just saves his brother with a stick (2032/2033).

It is giving me a big headache! I think ending 2 is the most satisfying, or otherwise ending 9. His brother was in Nepal at the time too. He might just wanted to take a hike and teenage Sun Woo might be worried and goes after him. Sun Woo catches up (grows a beard in the meantime) and is glad to finally catch up and save him.

It keeps bothering me however, that in episode 1 we also see a shadow lingering over brother (is it Sun Woo there too?) and that the brother tries to light an incense stick too (not the most logical thing to do when dying on a mountain).